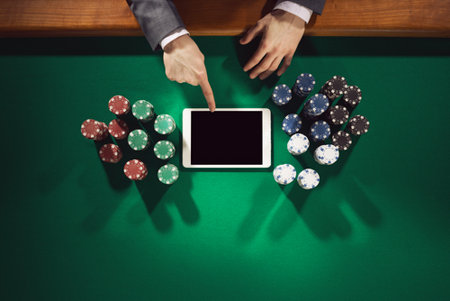 This November, you might see a number of ballot initiatives on gambling and you may find them all a bit confusing.

Screens are flooded with plenty of advertisements online and on television about measures on the movement ballot that would legalize sports wagering.

However, so far, not many ads are hitting the airwaves for a particular measure as much as they are opposing them.

"It's bad for tribes, and all Californians," one advertisement said.

That was on full display at a news conference in Commerce Thursday morning.

"We ask voters to vote no on the only eligible tribal gaming initiative on the November ballot."

The initiative folks are worried about is called the California Sports Wagering Regulation and Unlawful Gambling Act which is being pushed by many of the American Indian casinos.

It would legalize sports betting on their casino property, but it would also open the door for tribes to go after casinos that are flouting the law.

According to the Californians for Solutions to Homelessness and Mental Health Support, the group has gathered enough signatures to place the initiative on the November ballot.

One group worries it will give American Indian casinos open season to go after cardrooms at places like The Commerce Casino.

"It has a specific provision that would allow for lawsuits against cardrooms, and even customers in the cardrooms, as a way to close them down," said Compton Mayor Emma Sharif.

If the casinos were to be shut down, it could be devastating to some of these communities.

However, there is another gambling initiative voters might see on the ballot, which would legalize online and mobile sports wagering, but it does not mention any of that in the title.

Instead, it's called California Solutions to Homelessness and Mental Health Support Act.

Rob Stutzman is a spokesperson for a group called Tribal Sovereignty and Safe Gaming and he is opposed to that measure.

"Yes, they are promising money to fight homelessness, and if you look at the fine print, 90% of these dollars go out of state, and then the pennies that remain get chopped up through some other loopholes," Stutzman said. "Essentially, you're looking at maybe a 3% bump to the amount of money the state currently spends on homelessness."

Bottom line, one of the initiatives would make online sports wagering in California legal, the other would make it legal only for tribal casinos and racetracks.

Only the second is eligible for a ballot right now, but it's likely the other will also be eligible sometime in June.