Dr. Brittnie Watkins joins the Board after practicing complex commercial litigation as an attorney with Pisanelli Bice PLLC. Her practice areas included various forms of hotel and gaming litigation at the trial and appellate levels. Before earning a place in The Best Lawyers in America as a practicing attorney, Dr. Watkins served as a judicial law clerk to Justice Michael L. Douglas (Ret.) of the Supreme Court of Nevada, where she helped the Court make precedential legal determinations that ranged from intellectual property and gaming-related issues to constitutional and real property issues. In 2020, she became the first Black woman to be elected to the State Bar of Nevada Board of Governors, which oversees the legal profession.

Dr. Watkins earned two bachelor’s degrees from Michigan State University, with high honor in psychology and with honor in criminal justice. She also holds a master’s in criminal justice, doctor of philosophy in educational psychology, juris doctor, and master of laws in gaming and regulation from the University of Nevada, Las Vegas (UNLV). Her academic honors include selection to the Nevada Law Journal, the Dissertation of the Year Award, the Barbara Buckley Community Service Award, and the Roosevelt Fitzgerald Award for Outstanding Scholarship and Leadership.

Dr. Watkins is an avid community advocate. She has contributed hundreds of hours to pro bono representation and is a leader in various community organizations. Her commitment to leading with service earned her the Access to Justice Award of Excellence from Legal Aid Center of Southern Nevada, the Silver Service Award from the Public Interest Law Association, the Circle of Support Award from the Clark County Bar Association, and the Alumni of the Year Award from UNLV.

Dr. Watkins is also a mother to three children. She enjoys coaching her children's sports teams and reading or audiobooking. 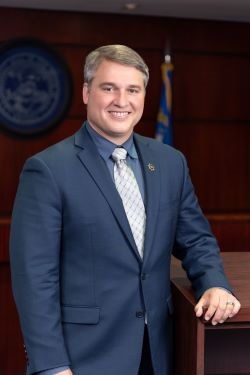 Phil Katsaros was appointed a Board Member of the Nevada Gaming Control Board by Governor Steve Sisolak in April 2019.  Katsaros’ term runs until January 28, 2023.

Katsaros has over 20 years of gaming industry experience, having served in a variety of positions and leadership roles during that time, including time spent as a regulator with the Nevada Gaming Control Board.  Much of Katsaros’ career has been focused on the international and online gaming sectors, where for example, he led efforts on a number of fronts for IGT’s international land-based business during a period of record growth.  All told, Katsaros has gaming industry experience in over 70 international markets.

Katsaros was most recently the Chief Executive Officer and a Director for Certus Gaming USA, Inc., a gaming systems supplier whose parent company is based in Luxembourg.  Prior to this, Katsaros served as the Head of Business Development for Inspired Gaming’s Virtual Sports business for both land-based and online casino markets in N. America.  Before Inspired, Katsaros was employed by IGT and one of its international subsidiaries, with responsibility for regulatory compliance, technical compliance and related market development activities for all European and Asian jurisdictions (land-based) where IGT conducted business.  Katsaros also spent time a number of years working for IGT’s online gaming side of the business.

Katsaros initially began his career in the industry with the Nevada Gaming Control Board, where he was first employed as an Agent in the Tax and License Division conducting regulatory and financial audits of Nevada licensees.  Katsaros later transferred to the Corporate Securities Division where he was promoted to the position of Senior Agent, and later Special Agent.  As a Special Agent, Katsaros was responsible for conducting and overseeing various types of investigative functions, including for instance, compliance reviews and licensing investigations of current and prospective Nevada licensees. Prior to his gaming career, he was an IT professional in the banking industry.

Katsaros earned his Bachelor of Business Administration Degree in Accounting from the Eastern Michigan University.  Katsaros currently resides in Reno, Nevada with his wife and their two daughters.  Apart from his time spent living overseas, he been a resident of Reno for the last 20 years.