Larry Loss, final employee who was there at the launch of the Iowa Lottery, to retire after 37 years 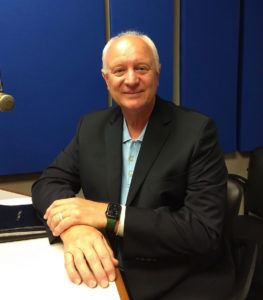 The last of the original staff members who got the Iowa Lottery up and running is preparing to retire.

Larry Loss was working for a beverage distributor in Spencer when the Lottery started hiring to go into business.
“There were 2,200 people applied for 30 jobs. And I was fortunate enough to get one of those 30 jobs. And so I was able to start in July of 1985, with the Iowa Lottery,” Loss says.

Larry was able to impress his new employers enough that they overlooked his last name when they hired him. “I understand. There was some interesting conversation about that before I was hired, whether the lottery should hire anybody with the name of loss or not. I’m glad they decided they could,” Loss says.

It worked out well for both as Loss started as one of the youngest employees hired at 26 years old — and just marked his 37th year with the Lottery on July 28th. The Iowa Lottery is much different today than it was then when they started with one scratch ticket called “Scratch Match.”

“We produced that one game, did everything of signing up retailers, getting locations ready to sell tickets, distributing tickets out to the retailers, so they could go on sale, ultimately, in August 22 of 1985,” he says. Loss says it was exciting for the employees to be making history and getting things underway — but it was also hectic.

“Oh, it was it was just wild, in some respects. Because the lottery started up in a hundred days,” Loss says. “And so from staffing and getting locations for offices, and vehicles and everything, the tremendous amount of work going on.” As a district sales reps he went out and worked with retailers to complete the license applications, they had to evaluate stores, get them licensed and get them ready to sell tickets when they eventually went on sale. 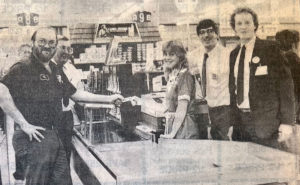 The clipping from the Spencer paper. Larry Origer (on the left) with the winning ticket, clerk Teresa Barrett and Hy-Vee assistant store manager Jerry Israel with Larry Loss on the far right.

Today’s jackpots are in the millions and some surpass one billion dollars, but the top prize in the fist ever game was $5,000. Loss had one of the first big winners on the day ticket sales started in 1985 at a store in Spencer.

“The energy that was produced in Spencer that night with somebody winning a $5,000 ticket, you know, it’s just incredible that first, everybody in the store was excited that somebody had won,” he says “the paper came down and took a picture of the winner, and everybody you know. It was a $5,000 prize — but at that time it was a big deal.” He has a newspaper clipping of the story and picture from that day.

Retailers had to stamp each ticket with their store name and number in the early days. Loss says technology has been one of the biggest changes he’s seen in the nearly four decades since then. “Technology has opened the door that you can, with barcodes, with computers with communication systems that are way better — cell phone connections between terminals — you can just do things faster and easier than you could back in 1985,” according to Loss.

Loss moved up from his first position to become regional manager of the Iowa Lottery’s Storm Lake office. He then moved to Lottery headquarters and advanced to his current position as the Lottery’s executive vice president and chief operating officer. He even had a two week stint at acting CEO during a transition in leadership. He says the constant challenges and opportunity kept the job interesting.

“It’s been tremendously fun to be part of a small organization that offers a statewide product. I’ve been able to be involved in the development of new products, and as technology changed, how can you use that technology to do different things with the tickets,” Loss says. “I’ve been involved with the design and development of the scratch tickets, which is the product that we sell the most of. And so, you know, there’s a lot of art and science and a little bit of luck that goes into creating those games and promotions around them. And it’s really been a lot of fun. And I’ve enjoyed it every day.”

Loss’ last day is August 18th, and says he will take a few months to enjoy retirement and decide what comes next. He does say he will continue on the board for the Heart of Iowa Mental Health Region, and explore other volunteer opportunities. It’s also rumored Loss has a lawn mowing passion and will continue those efforts.