The crystal is able to forever cycle between states without losing energy.

The crystal is able to forever cycle between states without losing energy. 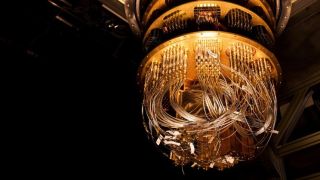 Researchers working in partnership with Google may have just used the tech giant's quantum computer to create a completely new phase of matter — a time crystal.

With the ability to forever cycle between two states without ever losing energy, time crystals dodge one of the most important laws of physics — the second law of thermodynamics, which states that the disorder, or entropy, of an isolated system must always increase. These bizarre time crystals remain stable, resisting any dissolution into randomness, despite existing in a constant state of flux.

According to a research article posted July 28 to the preprint database  arXiv, scientists were able to create the time crystal for roughly 100 seconds using qubits (quantum computing's version of the traditional computer bit) inside the core of Google's Sycamore quantum processor.

The existence of this weird new matter phase, and the entirely new realm of physical behaviors it reveals, is incredibly exciting to physicists, especially as time crystals were only first predicted to exist just nine years ago.

"This was a big surprise," Curt von Keyserlingk, a physicist at the University of Birmingham in the U.K. who was not involved in the study, told Live Science. "If you asked someone 30, 20 or maybe even 10 years ago, they would not have expected this."

Time crystals are fascinating objects to physicists because they essentially sidestep the second law of thermodynamics, one of the most ironclad laws in physics. It states that entropy (a rough analog for the amount of disorder in a system) always increases. If you want to make something more ordered, you need to put more energy into it.

This tendency for disorder to grow explains a lot of things, such as why it's easier to stir ingredients into a mixture than it is to separate them out again, or why headphone cords get so tangled in pants' pockets. It also sets the arrow of time, with the past universe always more ordered than the present; watching a video in reverse, for instance, is likely to look strange to you primarily because you're witnessing the counterintuitive reversal of this entropic flow.

The second law of thermodynamics says that all systems evolve toward a state of more disorder, where energy is shared out evenly across the system.

Time crystals don't follow this rule. Instead of slowly approaching thermal equilibrium — "thermalizing" so that their energy or temperature is equally distributed throughout their surroundings, they get stuck between two energy states above that equilibrium state, cycling back and forth between them indefinitely.

To explain how deeply unusual this behavior is, von Keyserlingk said to picture a sealed box filled with coins before being shaken a million times. As the coins ricochet from, and bounce around, each other, they "become more and more chaotic, exploring all of the sorts of configurations that they can explore" until the shaking stops, and the box is opened to reveal the coins in a random configuration, with roughly half of the coins facing up and half facing down. We can expect to see this random, half-up, half-down endpoint regardless of the way we first arranged the coins in the box.

Inside the "box" of Google's Sycamore, we can view the quantum processor's qubits much like we would our coins. In the same way that the coins can be either heads or tails, qubits can be either a 1 or a 0 — the two possible positions in a two-state system — or a weird mix of the probabilities of both states called a superposition. What's weird about time crystals, von Keyserlingk says, is that no amount of shaking, or zapping from one state to another, can move the time crystal's qubits into the lowest energy state, which is a random configuration; they can only flip it from its starting state to its second state, then back again.

"It just sort of flip-flops," von Keyserlingk said. "It doesn't end up looking random, it just gets jammed stuck. It's like it remembers what it looked like initially, and it repeats that pattern over time."

In this sense, a time crystal is like a pendulum that never stops swinging.

"Even if you totally physically isolate a pendulum from the universe, so there's no friction and no air resistance, it will eventually stop. And that's because of the second law of thermodynamics," Achilleas Lazarides, a physicist at the University of Loughborough in the U.K. who was among the scientists to first discover the theoretical possibility of the new phase in 2015, told Live Science. "Energy starts out concentrated in the pendulum's center of mass, but there's all of these internal degrees of freedom — like the ways the  atoms can vibrate inside the rod — that it will eventually be transferred into."

In fact, there's no way for a large-scale object to behave like a time crystal without sounding absurd, because the only rules that enable time crystals to exist are the spooky and surreal rules that govern the world of the very small —  quantum mechanics.

In the quantum world, objects behave both like point particles and little waves at the same time, with the magnitude of these waves in any given region of space representing the probability of finding a particle at that location. But randomness (such as random defects in a crystal's structure or a programmed randomness in the interaction strengths between qubits) can cause a particle's probability wave to cancel itself out everywhere apart from one very small region. Rooted in place, unable to move, change states or thermalize with its surroundings, the particle becomes localized.

The researchers used this localization process as the foundation of their experiment. Using 20 strips of superconducting aluminum for their qubits, the scientists programmed each one into one of two possible states. Then, by blasting a microwave beam over the strips, they were able to drive their qubits to flip states; the researchers repeated the experiment for tens of thousands of runs and stopped at different points to record the states their qubits were in. What they found was that their collection of qubits was flipping back and forth between only two configurations, and the qubits weren't absorbing heat from the microwave beam either — they had made a time crystal.

They also saw a key clue that their time crystal was a phase of matter. For something to be considered a phase, it usually has to be very stable in the face of fluctuations. Solids will not melt if the temperatures around them vary slightly; neither will slight fluctuations cause liquids to evaporate or freeze suddenly. In the same way, if the microwave beam used to flip the qubits between states was adjusted to be close to but slightly off from the exact 180 degrees needed for a perfect flip, the qubits still nonetheless flipped to the other state.

"It's not the case that if you're not exactly at the 180 degrees you will scramble them," Lazarides said. "It [the time crystal] magically will always tip a bit in, even if you're making slight mistakes."

Another hallmark of moving from one phase to another is the breaking of physical symmetries, the idea that the laws of physics are the same for an object at any point in time or space. As a liquid, the molecules in water follow the same physical laws at every point in space and in every direction, but cool water down enough so that it transforms into ice and its molecules will pick regular points along a crystal structure — or lattice — to arrange themselves across. Suddenly, the water molecules have preferred points in space to occupy, and they leave the other points empty — the spatial symmetry of the water has been spontaneously broken.

In much the same way that ice becomes a crystal in space by breaking with spatial symmetry, time crystals become crystals in time by breaking with time symmetry. At first, before their transformation into the time crystal phase, the row of qubits will experience a continuous symmetry between all moments in time. But the periodic cycle of the microwave beam chops the constant conditions experienced by the qubits down into discrete packets (making the symmetry imposed by the beam a discrete time-translation symmetry). Then, by flipping back and forth at twice the period of the wavelength of the beam, the qubits break with the discrete time-translation symmetry imposed by the laser. They are the first objects we know of that are able to do this.

All of this weirdness makes time crystals rich in new physics, and the control that Sycamore provides researchers beyond other experimental setups could make it an ideal platform for further investigation. That's not to say it cannot be improved, however. Like all quantum systems, Google's quantum computer needs to be perfectly isolated from its environment to prevent its qubits from undergoing a process called decoherence, which eventually breaks down the quantum localization effects, destroying the time crystal. The researchers are working on ways to better isolate their processor and mitigate the impact of decoherence, but it's unlikely they will eliminate the effect for good.

Despite this, Google's experiment is likely to remain the best way to study time crystals for the foreseeable future. Though numerous other projects have succeeded in making what convincingly appear to be time crystals in other ways — with diamonds, helium-3 superfluids, quasiparticles called magnons and with Bose-Einstein condensates — for the most part the crystals produced in these setups dissipate too quickly for detailed study.

The theoretical newness of the crystals is in some ways a double-edged sword, as physicists currently struggle to find clear applications for them, although von Keyserlingk has suggested that they could be used as highly accurate sensors. Other proposals include using the crystals for better memory storage or for developing quantum computers with even faster processing power.

But in another sense, the greatest application of time crystals may already be here: They allow scientists to probe the boundaries of quantum mechanics.

"It allows you to not just study what shows up in nature, but to actually design it and look at what quantum mechanics lets you do and doesn't let you do," Lazarides said. "If you don't find something in nature then it doesn't mean it can't exist — we just created one of those things."