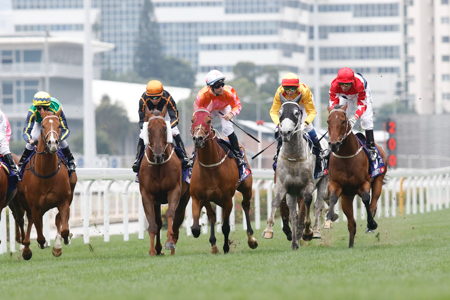 Churchill Downs Inc. has reached an agreement to purchase “substantially all” of the assets owned by Peninsula Pacific Entertainment, including Colonial Downs in Virginia and its off-track betting network, CDI announced on Tuesday morning.

The transaction, which also includes casinos in upstate New York and in Iowa, will cost $2.45 billion and it is expected to close by “the end of 2022,” Churchill said in a release.

After shutting down in 2014 due to disagreements between horsemen and the track’s then-parent company, Colonial Downs re-opened in 2019, one year after its new owners were successful in getting the legislature to grant the company monopoly rights to casino-style gambling in the state. The track and its off-track betting parlors currently operate 2,700 historical horse-racing machines, which are devices similar to slot machines.

Colonial Downs, which is located in New Kent, a rural area, was approved for 27 live racing dates this year, up from 21 dates in 2021, running from July 11 through Sept. 7. The track’s purses, which are heavily subsidized by casino operations, are set to average $600,000 a day, track officials said earlier this year. Much of the live racing at Colonial is conducted on turf.

Churchill announced the deal several weeks after reaching an agreement to sell a large portion of the property surrounding its Calder Casino in Miami for $291 million. The property used to be a racetrack, but Churchill ceased live racing operations under a lease to a third-party in 2020.

Churchill said in its release that it will use the proceeds from the Calder sale to finance a portion of the Peninsula transaction by structuring the deal under a like-kind provision of the tax code. The remainder will be funded by new debt and cash on hand, the company said.

Churchill also announced a deal last year to sell its Arlington Park property outside Chicago to the Chicago Bears, but that deal is not scheduled to close until early next year. Churchill officials acknowledged during a racing commission meeting last year that they were lobbying the state legislature for changes to the state's casino gambling laws, which allow for a casino at the track. Churchill declined to pursue a license for a casino, citing dissatisfaction with the gambling law.

In addition, Churchill will receive Peninsula’s stake in another project to build a casino in Richmond in partnership with Urban One. Local voters rejected the project in a vote in 2021. However, four other cities which qualified for casino projects in the state approved local referenda required under a law passed in 2019.

The New York property included in the transaction is the del Lago Resort and Casino in Waterloo, New York, a 95,000-square-foot facility that includes a casino, hotel, and two entertainment venues.

The Iowa property is the Hard Rock Hotel and Casino in Sioux City, which includes a casino, small hotel, and two entertainment venues. However, the deal is structured to allow Peninsula to sell the property to a third party, with Churchill acquiring the casino’s operating license. Churchill will lease the property from the third party, the company said.

Both the New York and Iowa casinos have live sports-book operations. Like most gambling companies, Churchill Downs is attempting to build a foothold in the highly competitive sports-gambling marketplace as more and more states enact laws allowing for the practice.